Posted on August 7, 2015 by addlibrarian

Okay, so I know I said I was done with Esther, but I’m changing my tune because Rebecca Kanner totally grabbed my attention with her new novel Esther which comes out in November. I was intrigued by Kanner’s previous book about Noah’s wife, Sinners and the Sea, but I never got around to reading it. I guess I’ve got to go find it now! 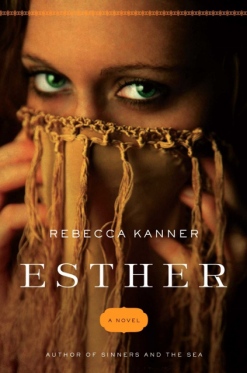 For Esther, becoming queen is a matter of life and death. The king’s harem is a dangerous place and only the favored or the very ruthless survive. To ensure her survival, Esther sets her sights on being queen and embarks on a quest to get there no matter what the cost. She finds help and allies in unexpected places and gradually comes to accept that sacrifices must be made, sometimes by her, and sometimes on her behalf by those she comes to love to secure her place as queen. Of course eventually she realizes that she must be willing to sacrifice her life for her people.

I loved Kanner’s portrayal of harem life! Runaway lions, assassins, poison, – it all felt very real. (Well maybe not the runaway lion so much…but it could happen!) I also liked the relationships in this story and the supporting characters, but I have to say that my favorite element in this book was the love story. *Spoiler alert* It’s not Xerxes! *End spoiler alert*  I should mention that there is perhaps less direct spiritual content than some may prefer in Biblical fiction, but that can be a plus for others. There is also some mature content appropriate to the story so keep that in mind if younger readers are your audience. If you liked Tosca Lee’s Legend of Sheba give Esther a try.

This eBook was provided by the publisher via NetGalley in exchange for an honest review.

1 Response to Esther by Rebecca Kanner