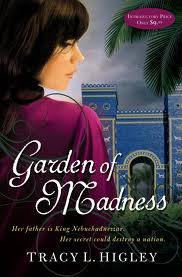 Featuring Nebuchadnezzer in Garden of Madness by  Tracy L. Higley

The Untold Story of King Nebuchadnezzar’s Daughter…
For seven years the Babylonian princess Tiamat has waited for the mad king Nebuchadnezzar to return to his family and to his kingdom. Driven from his throne to live as a beast, he prowls his luxurious Hanging Gardens, secreted away from the world.Since her treaty marriage at a young age, Tia has lived an indulgent palace life.But when her husband dies and a nobleman is found murdered in the palace, Tia must discover who is responsible for the macabre death, even if her own newfound freedom is threatened.As the queen plans to wed Tia to yet another prince, the powerful mage Shadir plots to expose the family’s secret and set his own man on the throne. Tia enlists the help of a reluctant Jewish captive, her late husband’s brother Pedaiah, who challenges her notions of the gods even as he opens her heart to both truth and love.In a time when few gave their hearts to Yahweh, one woman must decide if she is willing to risk everything—her possessions, her gods, and her very life—for the Israelite’s one God. Madness, sorcery and sinister plots mingle like an alchemist’s deadly potion, and Tia must dare to risk all – to save the kingdom, and to save herself.

Higley’s Seven Wonders series is written about the seven wonders of the ancient world. Garden of Madness is about the hanging gardens of Babylon, supposedly built by King Nebuchadnezzer for his homesick wife. According to the bible story, King Nebuchadnezzer went mad for seven years. (Interesting, but I never wondered what happened to the kingdom while the King was crawling around eating grass. Clearly, Higley has more imagination than I do.) I loved the court intrigue and treacher, the lies that treaten to destroy Tiamat, and her struggle to save herself from an arranged marriage, her kingdom from interlopers, and her father from his madness!

“…I Nebuchadnezzar lifted up mine eyes unto heaven…and I praised and honoured him that liveth for ever, whose dominion is an everlasting dominion, and his kingdom is from generation to generation: And all the inhabitants of the earth are reputed as nothing: and he doeth according to his will in the army of heaven, and among the inhabitants of the earth…none can stay his hand, or say unto him, What doest thou?…Now I Nebuchadnezzar praise and extol and honour the King of heaven, all whose works are truth, and his ways judgment: and those that walk in pride he is able to abase.”     ~Daniel 5:34-37